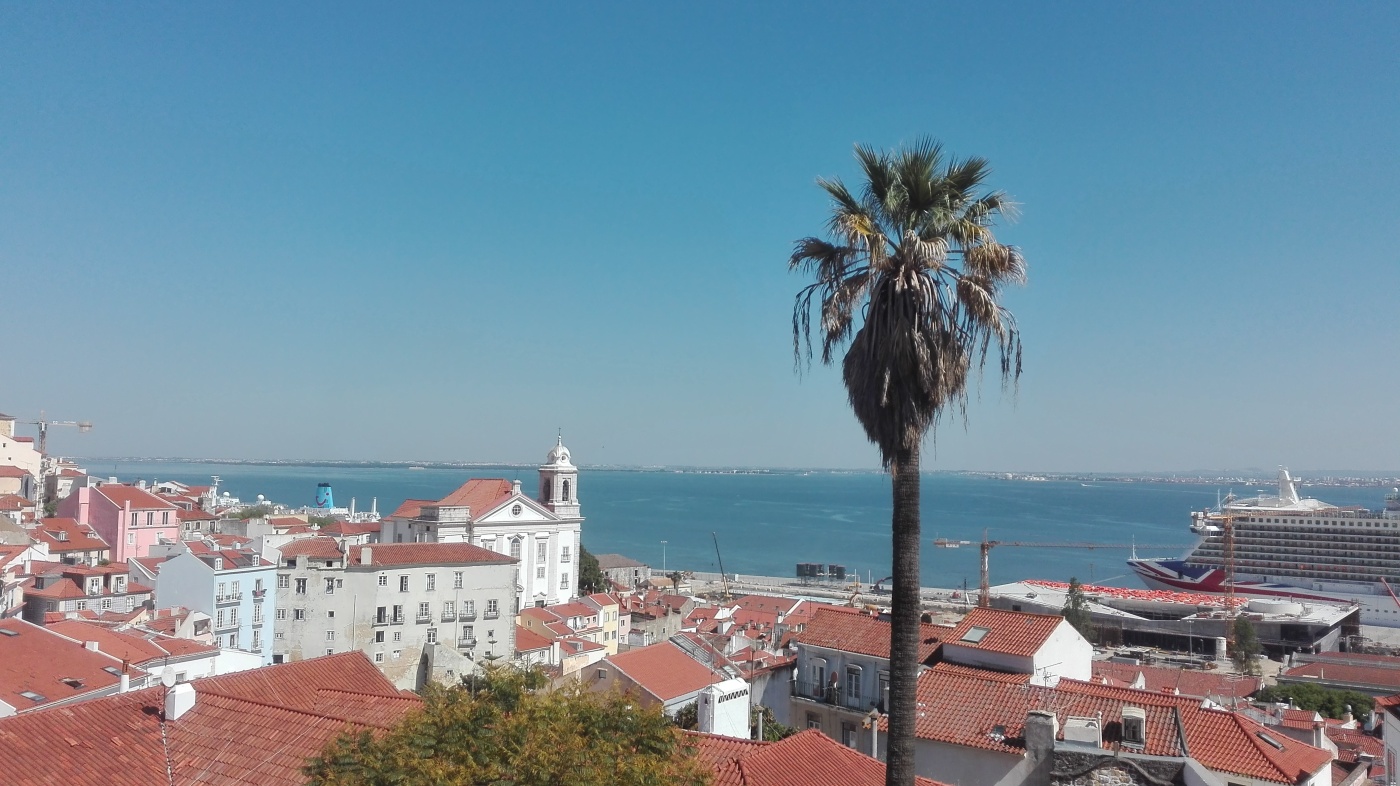 Very long time passed since the trip and the first part of this post, but unfortunately I have much less time for blogging than I would like to. Hopefully it will change soon, but until then, here is the second half of the trip …

So we jumped to the last wagon of the early morning Lisbon train in the very last minute with two cups of spilled coffees, disheveled and sleepless thanks to the pleasant previous night, we spent in the wine bar and the extremely thin walls of the hostel we stayed at. By the time we got to the front of the train – where our seats were booked – we realized that our effort for the breakfast and coffee was needless, because in Portugal (unlike in Hungary) there is a buffet wagon connected to domestic trains. The quality of the coffee was strongly objectionable as well as the taste of it, and unfortunately it wasn’t the case only in this particular buffet. Believe me our caffeine addiction has given the chance for Portugal several times,  but I can count on the fingers of one hand how many times we had a good or at least average quality coffee during our trip. Never mind! We love them for other things 🙂

We tried to book accommodation on the way to Lisbon, but unfortunately the wifi was really weak (roaming charges in EU weren’t cancelled yet) so we decided to look for something after arrival. However we were supposed to ‘eatonlyinlocalrestaurants’ and ‘saynoforfastfood’ by taking off the train these hungry, wi-fi hunter travelers couldn’t say no to the Vasco da Gama shopping centre which is situated right next to the station.   One and half hour later we were sated and on the way to the city center with booked accommodation and route plan. As soon as we came to the surface from the subway station, we realized that the couple of screenshots that we’ve made from the city map won’t be enough. No paper and offline map so there was nothing to do but turn the mobile data on. While we were walking on those cute narrow streets, the following conversation took place between us (beside of “the weather is sooo hot” and “my legs are falling apart”)

– There are so many closed shops here. How calm even tough it is in the middle of the center!

– Yes but fortunately there are some restaurants around. Oh look how cute is that!

– Okay so now left at the corner and that is the street where the hostel is.

Hostel. Check-in. Wifi password. Room in. Summer clothes on. Off to the city.

– Look at these! There are much more restaurants here, I haven’t seen these ones.

– Indeed! What a buzzy nightlife. By the why where is the party district?

– I don’t know. By turning at this corner we will be at the hostel’s street, right?

In some cases the advantage of spontaneous travel can be the disadvantage at the same time. The less detailed you organize it the more surprise you will face with. In our case the checking the districts and booking accommodation counted as tiny details. Thats’s why it could happen that at midnight, we were standing in the middle of the party district of Lisbon at Bairro Alto, totally shocked by the roaring and drunken crowd. Anyone who knows us is aware about the fact that we rarely say no to a good beer and/or a party, but this evening did was not that evening. But how come that we didn’t recognize these bars and discos? We were walking here in broad daylight! We dragged ourselves to the hostel with these thoughts where singing and dancing at the shower performed a new meaning thanks to the enormous hole in the wall between the bathroom and the neighboring nightclub. We surmised in Faro, but in Lisbon it became sure that those old tenement houses do not equal with thick and massive walls (unlike in Budapest). Fortunately we are good sleepers, well trained by music festivals and sleeping in tents during trekking tours so our subwoofer-killer neighbor could not beat us.

– We will check the accommodations’ reviews more carefully next time.

We fell into a deep sleep, which was broken by a garbage truck in the early morning. Literally, because they found the period between 4-5 am as the most appropriate time to collect empty glass bottles.

We were checking really carefully the trace of night madness during our morning walk but it seemed that they retreated back to their dark owls with the sunrise. But seriously check these pictures…

Apart from the finest lunar meal I’ve ever had, I did not eat too much delicious food during our stay. If I were living there, still, I would be in big trouble due to the extra weight caused by those the heavenly pastries.

We visited Belém district where the original famous Pastel de Belém cake is made, but the queue was so long that we decided to take the pastiche pastry instead which is called pastel de nata and it is sold basically everywhere.

Breakfast:  A Padaria Portuguesa is a chain restaurant with many branches. Quick, fresh, delicious food and the price of the menü is unbeatable.

Lunch: you can find real treasures not too far from the city center. Classic local taverns with delicious fish dishes, fresh salads and, of course, the inevitable Portuguese beers. Sagres or Super Bock? We loved both! 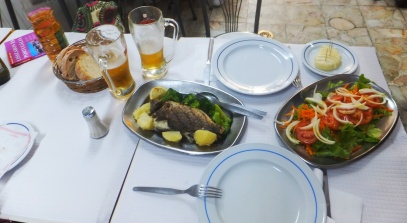 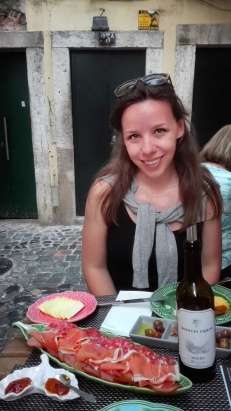 Dinner: It is hard to find better place for dinner than those charming restaurants so called fados located in the old town of Lisbon in Alfama. You can choose between the larger restaurants, the ones with live music and the smaller, more silent places.

We are not experts, but we like fine wines. As we expected, the home of the Port wine did not let us down. Feel free to ask for the wine of the house anywhere, we were really satisfied with it.

Two words: Bairro Alto. And if you prefer to stay in the middle of the night life or doesn’t like to sleep in silence I would recommend Dias e Dominguez hostel. In every other case stay far from there.

Start your walk from the Trade Square (Praça do Comércio), situated next to River Tejo, then walk across the beautiful Arco da Rua Augusta, right up to the Rossio square.

In 1755 a devastating earthquake made the city almost equal to earth. Much of the buildings suffered enormous damage. One of the iconic symbols of this catastrophe is the Carmo Church and Archaeological Museum. You can get to the square where the church is with a unique elevator, called Elevador de Santa Justa.

We took the most tiring way to reach the Saint George Castle (Castelo de São Jorge) up on the hill by walking via Alfama, the old city’s little streets. We got rewarded by the wonderful view to the city and the nature around it, however the extreme long queue and the entrance fee broke the perfection a little bit.

Lisbon’s Belém district is also abundant with sights. The easiest way is to get to the local bus service from downtown. The Padrão dos Descobrimentos monument commemorates the era of great geographic discoveries, with Price Henry the Navigator’s statue on the front of it. Beside of that St. Jerome Monastery, the Belém Tower and the Pasteis de Belém are the most outstanding attractions of the district.

A 40-minute train ride from Rossio Station to Fairy Land.  The dazzling castles and villas used to be popular summer residences of Portuguese kings and nobles. Depending on the level of your energy and money, it will be a half or one day trip. Energy will be needed if you decide to hike, money if you want to get to the castles by car, horse carriage or any other transport than your own legs. We didn’t have any of them thanks to the previous night’s ‘onlyonebeer’.

We trekked up to the castle hardly in total hangover and sleepless mode, encouraging each other or better to say encouraging me not to stop at the middle. We took the castle and returned to the capital as heroes.

Overall, Lisbon was a good experience, but I’m not sure I would go back. I found it somewhat barren, crowded and impersonal. Fortunately, Porto compensated us …